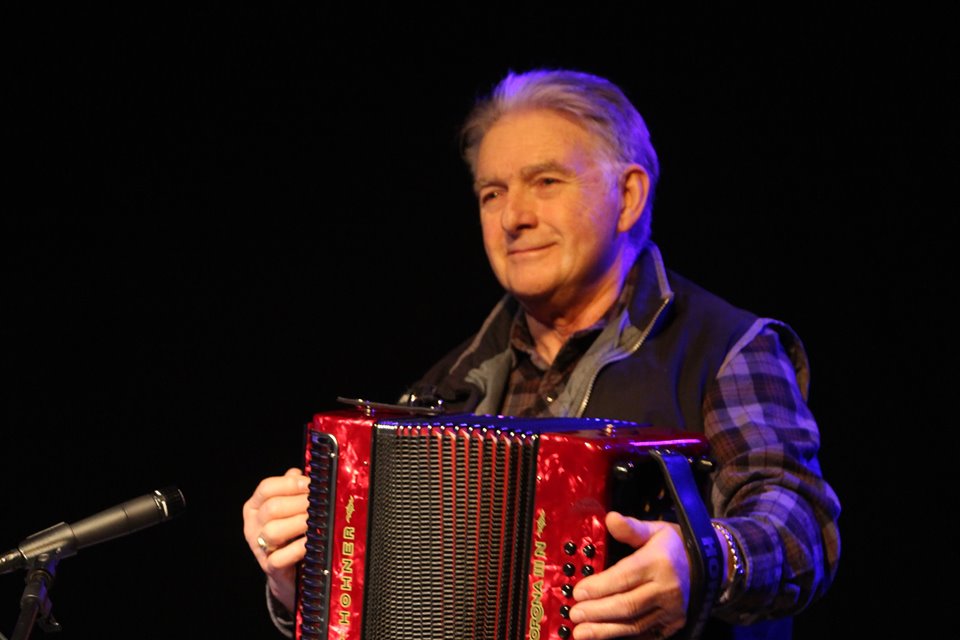 Baxter Wareham comes from Harbour Buffett in Placentia Bay and Baxter’s music is Placentia Bay music. His tunes, songs and stories are imbued and performed with the spirit of the seafaring people with whom he grew up, who he has always admired and from whom he learned many of the pieces in his vast repertoire.

Baxter’s involvement in traditional culture is best characterized by its diversity. Firstly, Baxter is as equally recognized for his button accordion music as he is for his singing and for his stories and recitations. But this diversity has marked his lifelong sharing of these talents as well. Baxter began playing and performing with his four brothers at parties and informal gatherings and soon they were invited to the 1973 Mariposa Folk Festival. Baxter suggests that this resulted in further invitations to, for example, the Philadelphia Folk Festival (where they were accompanied by the respected Placentia Bay singer Mac Masters) and to the 1976 American Bicentennial Celebrations. Since the early 70’s, then, Baxter has played most of the festivals in Newfoundland and many in the rest of Canada as well.

Baxter has also collaborated with a diverse host of other Newfoundland musicians. He was an integral member of the trio, with Pat and Joe Byrne, which produced the album Towards the Sunset in 1983. (Indeed, both Pat and Joe acknowledge that it was the fortunate inclusion of Baxter’s rendition of “Rubber Boots” on that album that furthered its popularity.) His involvement with renowned fiddler Kelly Russell and folksong luminary Anita Best resulted in appearances in Bristol, England and the release of the 1997 album Lately Come Over by Bristol’s Hope, a venture which also included master guitarist Sandy Morris and bassist Derek Pelley. This quintet (of Wareham, Russell, Best, Morris and Pelley) also performed at a Federal Government sponsored Canada Day event in Japan. He has also appeared at festivals and special events in Vancouver with the late Newfoundland fiddler, Rufus Guinchard, and singer/songwriter Jim Payne. Further collaborations and guest appearances have been on the album “Newfoundland Bluegrass” released in 1994 by the Newfoundland Bluegrass band Crooked Stovepipe as well as his contribution to roots performer Rik Barron’s 2008 album Right to the Bone. However, when he recalls memorable solo performances his fondest recollections are of his times playing at the concert series at the Random Passage site and his many yearly appearances at the various venues of the March Hare.

In 1989 Baxter released his solo album Buffett Double. Produced by Pigeon Inlet Productions this is a representative selection of Baxter’s accordion tunes and includes a recitation as well as an original composition, “The Harbour Buffett Waltz.” The fact that selections from this album are still being played on radio programs speaks volumes.

It is perhaps most fitting that the last recording that Baxter has released so far is Come Tell Me a Story Grandad, a selection of his favorite and most requested recitations. The album was produced in 2016 by his nephew, Leland Wareham, and Baxter admits that he was encouraged in this project by his nieces, nephews, children, grandchildren and other younger members of his extended family. Passing his material on to the younger generation has also been a passion for this lifelong teacher.

Indeed, Baxter’s some sixty-year involvement with traditional music and culture has been marked by considerable diversity but his performances always have a special quality inspired by the Placentia Bay roots from which he sprang. As Pat Byrne says in the liner notes for Buffett Double, “… there is a special flavour about them that comes from their having been rolled around…on the swell in Golden Bay, from their many incarnations in forecastles…and from their having ‘rattled a few loose panes in the windows’ at many a dance.”

For his diversity of performance, collaboration and output and for his contribution to expanding awareness of the music and culture of the province and especially of his beloved Placentia Bay as well as for his lifelong efforts to pass on this awareness to future generations the Newfoundland and Labrador Folk Arts Society is pleased to present the 2020 Lifetime Achievement Award to Baxter Wareham.