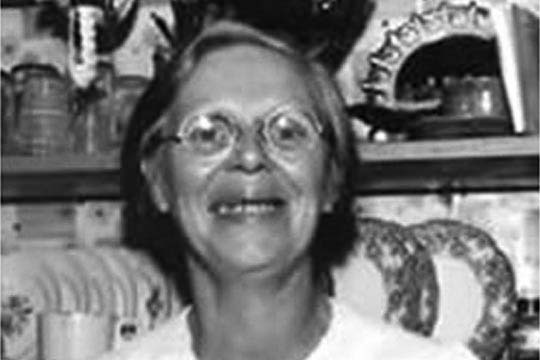 Rebecca (Becky) Bennett (1908-) is best known for her extensive repertoire as a traditional singer. This spry lady of barely over five feet, has sparkling eyes, a terrific sense of humour and a love of life itself. For decades she has kindly shared her talents with singers and researchers alike, generously opening up her home and heart to anyone interested in hearing many of her songs or simply to learn about life along the Great Northern Peninsula as she has known it.

A native of St. Paul’s, Becky is one of 14 children by John Henry Benoit (Bennett) and Martha Jane Payne. Her mother was a good singer and her father played the violin and taught many others in his community how to play. She learned many of her early songs from her ‘Granny Payne’ and her mother, one of the few literate people in the community, frequently read song lyrics to her:

Becky received very little schooling when she was young attending the Grenfell Mission school for six weeks each summer from 1916 to 1920. Through the Grenfell teachers she learned how to read and was then able to learn songs from sources such as the ever-popular Gerald S. Doyle songsters and The Family Herald.

Becky notes that she could hear a song twice and know it and recalls with delight the great rivalry for songs in her family, recounting how she learned the song Jimmy Whelan shortly after her brother acquired it. When he wouldn’t give her the lyrics she searched his room for the sheet of paper with the words from a friend who had written it off for him. She had already memorized the tune and so surprised her brother one night by singing it in front of him.

Becky married Freeman Bennett, also of St. Paul’s, in 1922. Through her husband she was embraced by another musical family with a vast repository of songs. In the early years, as there were no roads, they frequently walked along the coastal foot paths or traveled by boat, using the time to share music and stories with other travellers. Soon the couple gained a considerable reputation up and down the Great Northern Peninsula for their musical talents.

In the late 1950s, while collecting song material for Songs of the Newfoundland Outports (1965) the folk-music specialist, Kenneth Peacock, eventually recorded 140 songs from the Bennett family. Later reporting back to the National Museum Peacock noted “the Bennetts of St. Paul’s are a rare phenomenon, even in rural Newfoundland.” and was impressed by Becky’s “highly developed musical sense” further noting that she “is practically an institution in herself.” Peacock eventually published 93 Bennett songs in Outports including 12 recorded from Becky.

In 1966, based on their reading of Outports, Memorial University folklorists visited the Bennetts and recorded from them mummering plays, riddles and several folktales, songs and stories. They eventually included several tales in Folktales of Newfoundland: The Resilience of the Oral Tradition (1996). In the 1970s young Newfoundlanders interested in learning about their own musical roots discovered Becky and Freeman Bennett’s names among the many that Peacock had published in Outports. Some such as Pamela Morgan and Kelly Russell of FIGGY DUFF started to show up on Becky Bennett’s door asking to hear her perform, in person, what Peacock had encapsulated in a book. Much to their delight, Becky Bennett was always pleased to do so.

In 1977 and 1978, Becky was invited to perform at folk festivals in St. John’s and at Lomond, Gros Morne National Park. Here and in the ensuing years in addition to performing songs Becky spoke often of her experiences in St. Paul’s and of life along the Great Northern Peninsula, about working as a cook in the lumber camps and about each of the traditional domestic crafts she learned including skin-boot making. She could comfortably discuss the demands on women along the coast as well as the challenges of rearing her large family and how to make the best with what little people had on hand.

Becky Bennett continues to have a big heart especially for those who want to know about her songs and her life growing up in St. Paul’s. When you ask about the songs she knows, each one has a story. Some of her songs such as The Dance at Daniel’s Harbour, and Trip to Cow Head reveal much about life during the first half of the last century. She recalls that her mother who knew Frozen Charlotte would regularly sing it for her nephew when he was a little boy. Today she thinks nothing of singing a favorite song over the telephone for some niece or nephew who asks and they often do.

In 2003, at age 97, Becky moved from her home in St. Paul’s to a nursing home at Norris Point in Bonne Bay. Her room is surrounded by pictures of her many children and grandchildren. Somewhere in the midst there is also a photograph of her taken by Kenneth Peacock in 1958, a small reminder of her lifelong contribution to both Newfoundland and Canada’s musical heritage.