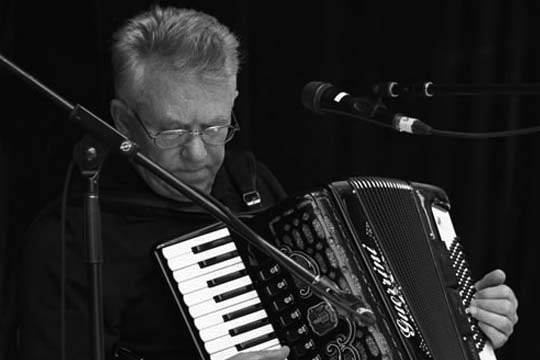 Says Tom Power, board member of the Newfoundland & Labrador Folk Festival, “Ray Walsh is one of the best known and most recognized accordion players in Newfoundland & Labrador. He has always been a proud advocate of traditional music in this province, however, there is nothing more wonderful than listening to the passion and enthusiasm which Ray shares through his performances.”

Ray Walsh has been playing traditional music in Newfoundland for almost as long as he can remember. As a young man, Ray played at dances and gatherings in Bay de Verde, Conception Bay; he was a featured performer on CBC Television’s All around the Circle from 1964 until 1975, and has been featured on many television and radio shows in a career spanning nearly fifty years. He has contributed to many recordings and concert tours for performers John White, Joan Morrissey, Kevin Collins and many more, and in 1995 formed the Walsh Family Band with his brother Gerard, son Greg, and daughter Michelle.