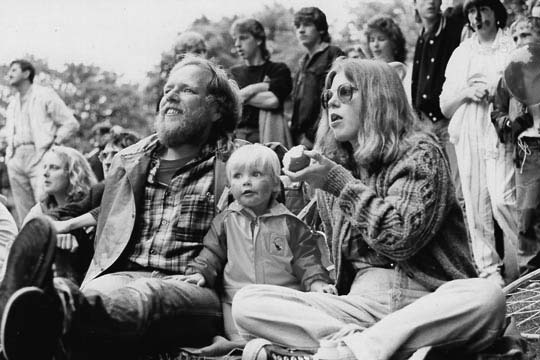 Born in Ontario, Susan Shiner moved to Hawke’s Bay, on the Northern Peninsula of Newfoundland, in1972. In 1979, she met Rick Page, also from Ontario, at Woody Point while he was on vacation. Since that day, the two have made their home in Newfoundland. This meeting almost 40 years ago marked not only the beginning of a long love story, but also the start of a shared and steadfast commitment of supporting musicians and other performing artists both on stage and backstage in every possible way.

As volunteers, Rick and Susan have opened their homes to performers, housing, feeding and transporting a long list of participants in cultural events as varied as the Newfoundland & Labrador Folk Festival, the Sound Symposium, Lawnya Vawnya and Festival 500. Between festivals, this couple consistently supported generations of local talent, from the most well known as well as the lesser known.

Says acclaimed Newfoundland performer Jim Payne “Susan Shiner and Rick Page have been lifelong supporters of the revival of folk and traditional music in this province, in this community, and especially at the NL Folk Festival. Susan was instrumental in presenting the Good Entertainment for Anyone’s Not Used To It festivals in 1977 and 1978, which brought together music, song, crafts and storytelling tradition bearers from all over the province for the first time. These early efforts to raise the profile of the old guard of this province traditional musicians laid the foundation for this and many other summer events festival whose impacts re- sounded far beyond their venues, and left a deep and lasting impression on the social and cultural fabric of this place. For Susan and Rick, their efforts were always caring, committed, political, socially responsible, completely altruistic, and always offered with a desire to contribute, and to make the world a better place for all of us. We are fortunate to have them in our community.”

Each in their own way, Susan Shiner and Rick Page contributed to some of the most important events in the revival of our folk music and traditional culture through the 1970s and 1980s.

In 1975, the organizers of the Mariposa Folk Festival, in Toronto Island, decided to include performers from Newfoundland. Susan accompanied Rufus Guinchard, her Hawke’s Bay neighbor, to that event. In both 1976 and 1977, Shiner was asked to organize and accompany a larger contingent of traditional singers, musicians, dancers, crafts people and storytellers from Newfoundland and Labrador to that mainland festival. In 1977, Susan, with Isabella St. John and Rhonda Payne, organized the Good Entertainment for Anyone’s Not Used To It festival at the LSPU Hall. With an audience of 600 people, the event featured 26 performing artists and craftspeople from all over Newfoundland & Labrador, including Émile Benoît from the Port-au-Port Peninsula, Becky Bennett from the Northern Peninsula, and Leo O’Brien from L’Anse-au-Loup in Labrador.

In 1978, Shiner hosted three musical sessions at the second NL Folk Festival in St. John’s She also organized, with Isabella St. John and Elaine Wychreschuk, the second Good Entertainment festival in Lomond, Gros Morne Park. With more than 2,500 people in attendance, 40 artists and artisans performed, including a large group of francophones from the Port-au- Port Peninsula and other communities of the West Coast. Park officials refused to allow a third festival, planned for 1979, for fear of “traffic jams.”
In 1980 the Terre-Neuviens Français of Cape St. George invited Susan and Isabella St. John to work on the programming and recruitment of participants for the first festival “Une Longue Veillée.” In addition to the numerous talented musicians from the Port-au-Port Peninsula, this festival brought together francophone artists from St. Pierre-et-Miquelon, the Magdalen Islands, Nova Scotia, and New Brunswick. Rick Page, with whom Susan was now sharing her life, volunteered his talents as a carpenter for the construction of stages at “Une longue veillée”.

Susan’s commitment to equality for women has shone through all her work in support of musicians and artists. As an event organizer, she took care to put the spotlight on the accomplishments of many women from rural communities. Highlighting the talent, resilience and humour of these women, is in Susan’s view, one of her greatest accomplishment in the folk arts scene.

The couple settled in St. John’s in 1984. Rick, a well respected carpenter around our city, has always made it a point to hire musicians on his crews. Rick has volunteered as chief carpenter at the NL Folk Festival for almost ten years.

“Susan and Rick are the white-haired hippies who go out to see every ounce of the great music that consistently keeps coming up locally St. John’s and from away. They listen, they sing and they dance with more gusto than any of us “kids” ever could” says Geraldine Hollett, singer from the beloved musical group The Once. “If they love your band, they will be the best groupies you could ever hope to have. If they hate your band, they’ll likely show up anyway because they get what makes and keeps a community. Their level of commitment and volunteering kicks agist ideas to the curb. They have selflessly welcomed hundreds of musicians into their home for decades and the amount of food they have made to feed the travelling minstrel would leave most of us aghast in awe. Their pride in this place makes them guides, grandparents and governors to all those who need to see, feel and learn. They passionately give back over and over and over again. Folks like Susan and Rick are not a dime a dozen, but they should be. Congrats on the award, and on behalf of all musicians, thank you for being our gracious host and making us feel like your home is our home.”

After the birth of their children, Claire and Ian, Susan and Rick took great pleasure to attend the NL Folk Festival annually. Indeed, it became almost a familial duty. As often as possible they volunteered their support to the organizers, a family tradition that they hope will be passed to their granddaughters, Maggie, born in 2015 and Elizabeth, born in 2017.