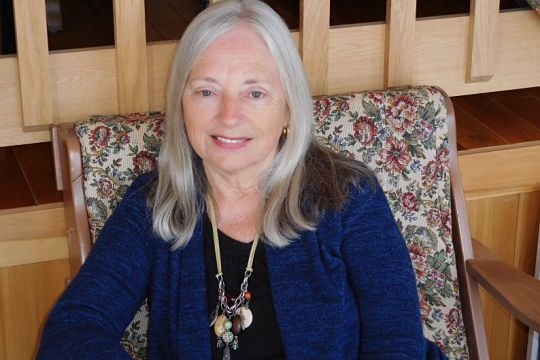 2019 marks fifty years since Shirley Montague gave her first performance at the Town Hall in her hometown of North West River, Labrador. After moving to Norris Point in the mid-1970s, she became a fixture on the provincial music scene through performance, song-writing, recording, radio and television.

Grounded in the traditional music of Labrador and inspired by nature and the life stories of hardworking people who live off the land, Shirley began writing her own songs in the 1970s. An excellent storyteller, her compositions capture the beauty, humour and hardship of life in Labrador and rural Newfoundland.
She is also a fine singer, guitarist and fiddler, and has produced five solo albums over the span of her career.

In addition to her solo work, Shirley has been involved in several collaborations with some of the province’s finest musicians. Notable projects include Gros Morne: A Musical Journey (1999), a haunting album co-produced by Shirley and musician Eric West and inspired by the culture and landscape of the national park; Remembering the Red Bay Basques (2008) – a compilation recording spear-headed by Shirley, focussed on the 16th-century Basque whaling industry in Red Bay Labrador; and Only Lonely Sometimes – Shirley’s contribution on the renowned recording 11:11 Newfoundland Women Sing Songs by Ron and Connie Hynes (1997). In 1988, Shirley also wrote original music for the Ode to Labrador and rearranged the lyric to incorporate Inuktitut and Innu-aimun translations. That version is included on the compilation Our Labrador, which features folk songs in Labrador’s three languages.

An organizer as well as an artist, she has created multiple performance opportunities for other musicians. In 2007, Shirley founded Trails Tales and Tunes: a unique ten-day festival in Gros Morne national park showcasing the physical beauty of the park in combination with the best in music and storytelling. It is a massive undertaking that provides a boost to the local economy and gives gigs to local, national and international performers. Shirley was highly involved in the establishment of the office of Creative Gros Morne, and also instigated the first small town MusicNL (then MIA) awards and conference event in Rocky Harbour in 2003. Since then, MusicNL has taken the event to other rural locations with great success.

Shirley has been recognized for her work with numerous awards, including Hospitality Newfoundland and Labrador’s Cultural Ambassador Award and their Cultural Tourism Award, MusicNL’s Denis Parker Industry Builder Award, the ECMAS’ Stompin’ Tom Unsung Hero Award, The Queen’s Diamond Jubilee Award, and the Historic Sites Manning Award. She is a renaissance woman who understands both sides of the stage. As one of the province’s most beloved musicians, her understanding of the bond between performer and audience has inspired her to create venues in rural settings where artists can become a meaningful part of the life of small community. Her insistence upon remaining and providing work for people in rural NL is exemplary, and serves as a reminder that these communities are vibrant, viable and indispensable to our culture.

For her outstanding contribution as a musician, tradition bearer and community builder, the Newfoundland and Labrador Folk Arts Society is delighted to recognize Shirley Montague as the 2019 Lifetime Achievement Award recipient.