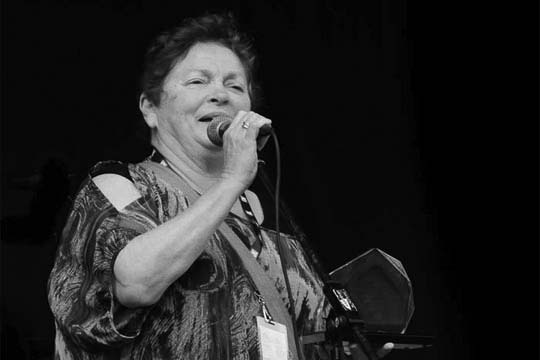 The Newfoundland and Labrador Folk Arts Society, producer of the 39th Annual Newfoundland & Labrador Folk Festival, is proud to announce that the festival has selected renowned folk musician and folklorist Anita Best as the recipient of this year’s Lifetime Achievement Award. Anita Best has spent a lifetime exploring, cataloguing and celebrating the rural Newfoundland lifestyle and culture. In the process, she has become one of the province’s most prominent traditional singers.

Best has greatly contributed to the cultural fabric of this province through her talent and passion for traditional folk music. Says President of the Newfoundland and Labrador Folk Arts Society, John Drover, “Anita has been involved with the Folk Arts Society of Newfoundland and Labrador for 37 years as a director, volunteer, president and performer. She was also fundamental in setting up so many of the programs that the Folk Arts Society offers to young people, in an effort to preserve and hand down the intangible culture of this province. Not only has she given thousands of hours to the preservation of folk traditions in this province, she is also a remarkably talented performer, and is incredibly deserving of this Lifetime Achievement Award.”

Says Best, “Our intangible cultural heritage is the real culture of Newfoundland & Labrador. The songs and stories feed the creativity of Newfoundland’s writers, musicians, storytellers and visual artists in successive generations, ensuring that the artistry of former generations can continue to live on.” Continues Best, “It is such an honour to follow in the footsteps of Ruth Matthews, Frank Maher and all of the other previous recipients of the Lifetime Achievement Award. I am truly grateful to the Folk Arts Society Board for being selected as the recipient of this prestigious award.”